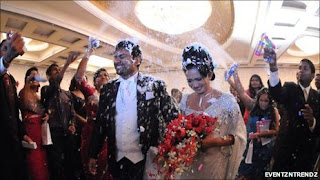 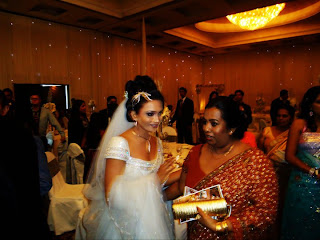 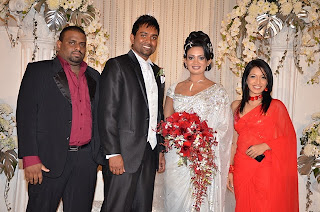 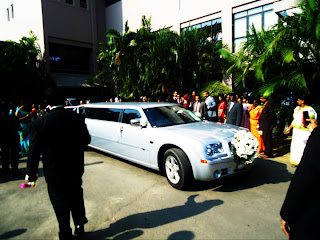 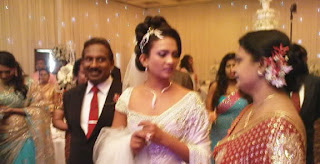 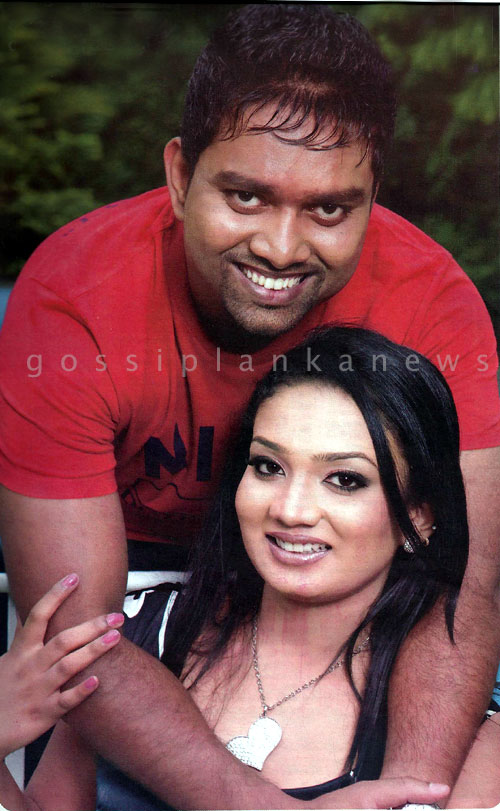 Women in white and gold saris and sparkling headdresses step forward with plates of mango.

Men in turbans and sarongs, red and white, beat drums and chant.

Continue reading the main story
Extreme World is a new season of coverage on TV, Radio and Online, examining global differences. Over the next few months, BBC News correspondents will be exploring eight key themes that illustrate the divisions in our extreme world.

Special Report: Extreme World
As she arrives at her high-society wedding at a luxury hotel, the bride is given a welcome fit for royalty.

For the groom's entrance, dancers somersault in the air and spin round him.

The singers and dancers from Kandy in Sri Lanka's central highlands could have stepped straight from the courts of the last kings of Ceylon.

Nadini Premadasa is a young singing star, and some of the country's best-known musicians, TV stars and celebrities are here to see her marry Madura Abeyesinghe.

Yet at the heart of this glitzy ceremony, in the corner of this grand ballroom, is a simple platform that you might find in any ordinary Sinhalese village.

It is on this poruwa that a bride and groom come together in marriage, with a Buddhist holy man presiding and chanting.

The couple take part in a series of rituals as their close families pray, their heads bowed.

Six young girls in white, known as the jayamangala gatha, come to bless the marriage, one playing the violin while others sing.

Then both fathers pour holy water on the couple's hands to mark the moment of their marriage.

Rings are exchanged - as in Western societies - and the bridegroom places a jewelled necklace around his bride's neck.

She is presented with a cloth, the sari she will wear in a couple of day's time at the ceremony known as the Homecoming, hosted by the groom's family.

A coconut is broken and an oil lamp is lit, symbolising good luck, and a new start.

Then the festivities begin.

With one hand each on the bottle, Nadini and Madura pour champagne into a pyramid of glasses, before greeting the guests, table by table.

This is a huge day for them and it seems no expense has been spared on the entertainment, the food and drink, or the styling of the bride.

"Every girl has her dreams," Dhananjaya Bandara, the stylist for the bride and five bridesmaids, tells the BBC.

"Sri Lankan girls dream of their bridal day, so they are spending more money for that."


The couple incorporated many traditional elements into the ceremony He explains that Sri Lankans usually either choose a "high country" styling for their weddings - drawing on the traditions of Kandy - or, as today, a "low country" one, where the bride's clothing is closer to Indian tradition.

He has said he styled Nadini "like a Roman princess".

The groom and his close friends are dressed in an entirely Western style.

While some Western customs are popular, best man Hasitha Wijesekera says it is important to hang on to more traditional Sri Lankan elements.

"Though we have mixed weddings, it doesn't mean that we have just let go of our cultural values," he says.

"I think it's a very good thing to have the poruwa ceremony and there's a lot of meaning in it."

Nadini, being a famous singer, gives a wedding surprise to her new husband by getting up to sing with the band, The Gypsies, one of the most successful in the country.


Arranged marriages are less frequent than they used to be At one point the president's son, Namal Rajapaksa, arrives.

He is present as the bride and groom sign the register to become legally man and wife, and his brief visit creates a stir.

Nadini's family have employed special wedding organisers to arrange the elaborate event, as do many wealthy families.

"It takes about a year to plan a wedding," he says. "But there are some couples who have come to us around six months beforehand. Then it's a bit difficult."

It is not just the wedding ceremony that these days has a Western flavour.

Society is becoming more Westernised, too: this is a love marriage, not one arranged by the family.

Among the Sinhalese population especially, this is getting much more popular says chief bridesmaid (and fiancee of Hasitha) Dilini Gunawardane.

"If they [two young people] are in love and if their parents are not allowing it, somehow they try to convince their parents that 'this is the right person for me'," she says.

After toasts, speeches and a sumptuous meal, a carnival mood takes hold as the trumpeters and drummers of a traditional Sri Lankan band enter the hall.

The drums beat and the wedding crowd lifts Nadini high in the air and bounces her around before bride and groom are showered with confetti and foam.

And in a final nod to the twin traditions at play today, they leave in a horse and cart - before moving to a silver stretch limousine.