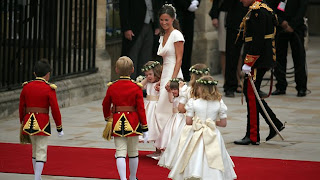 IT WAS the day Royal Maid of Honour Pippa Middleton dazzled the world in a dress that left very little to the imagination ... but it emerged that she may have kept something secret after all.
For it seems that Carole and Michael's second daughter is engaged in all but name to her City broker boyfriend Alex Loudon.

The couple have stayed silent about the future of their relationship for fear of detracting attention from William and Kate.

If rumours of an official announcement later this year are true, they will cause widespread disappointment, for it seems that in the wake of "That Dress", Pippa could have her pick of suitors.

The sensational fluid white column made by Sarah Burton at Alexander McQueen was an unusual choice both for its bridal colour and its curve-enhancing cling.

In an act of sisterly generosity, Kate must have sanctioned it in the full knowledge that it would showcase Pippa's fabulous figure, deep tan and glossy hair to perfection on the world stage.

That it did. The second she stepped out on to the red carpet outside Westminster Abbey, shepherding Kate's four young bridesmaids and two pageboys, a new global media star - Her Royal Hotness, as Pippa was instantly nicknamed - was born.

She trod a carefully calculated line between sheer class and risque sex appeal - and brought a nation's men to their knees.

The Duke of Edinburgh and Prince Harry, who flirtatiously walked her arm-in-arm back down the aisle after the wedding ceremony, were two of her most immediate admirers in the Abbey. Outside, her appearance ignited the blogosphere and almost led to the crash of Twitter. In America and Australia too, Pippa was declared a knockout.

Those in the Abbey who watched her arrival thought just one thing - that Pippa looked smoking-hot in what was probably the kind of dress Kate would have chosen if she had been a Bucklebury bride and not marrying into the House of Windsor.

But the revelation of the day was not just what a wonderful rear view Pippa offers - her bottom now has its own internet appreciation society, which already had 54,000 members last night - it was her polish, her self-possession, her grace and her diligence towards her sister.

Just as the fraternal bonds between William and Harry were plain to see, the Middleton girls seemed to have a powerful, loving link, with Pippa the best supporting actress in her sister's romantic drama.

Much has been written about Kate, already the subject of several biographies, but what do we know of Pippa?

Philippa Charlotte Middleton is Carole and Michael Middleton's second daughter (she is 27 to Kate's 29) and their middle child. She was not even at school when her parents founded their company, Party Pieces, on which they would build the family's financial and social success.

She lived the first 10 years of her life in a four-bedroom Victorian villa in Bradfield Southend, Berkshire, before the family moved in 1995 to the mansion where they remain today, in the village of Bucklebury.

Like her sister, Pippa attended Marlborough College in Wiltshire before following in her footsteps to a Scottish university. But while Kate chose St Andrews, where she met her Prince, Pippa selected the party town of Edinburgh.

She studied English Literature but it would also be fair to say she learned the art of social climbing, aligning herself with "the Castle Crew", the scions of families with land and stately homes.

A fellow undergraduate summed her up thus: "Pippa arrived knowing no one and made it her business to leave knowing everyone."

A prime example is her surprising friendship with Prince Harry's on-off girlfriend Chelsy Davy. Said a source: "They are very good friends and when Chelsy is in London, they often go out together. They are much closer than Chelsy and Kate.

"At the beginning it used to upset Kate - she felt left out. But at heart Pippa is a party girl and she likes to have fun, so she and Chelsy had some really good nights out together, which Chelsy and Kate have never actually done."

After graduation, Pippa carved a career that would combine the two significant interests in her life - partying and networking. She went to work for events planner Table Talk, where her ferocious organisational skills and attention to detail combined with her bulging contacts book quickly elevated her to the capital's A-list

In 2008 she was named Number One Society Singleton by Tatler magazine, ahead of models, actresses, rock stars and heiresses.

She even eclipsed her new brother- in-law's cousin Princess Eugenie.

But her single status was merely a pause between well-heeled and well-connected boyfriends. They include Jonathan "JJ" Jardine Paterson, an heir to the Hong Kong Jardine Matheson fortune, Scottish aristocrat Billy More Nesbitt and diamond heir Simon Youngman.

A year ago she began dating Alex Loudon, 30, who, crucially, has been a friend of Prince William since Eton. His growing importance in her life was underlined when it was revealed that he had attended Kate's confirmation service just weeks before her wedding and by his presence in the front row of the Middletons' family seats at the Abbey.

A friend revealed: "Pippa has been busy planning her sister's wedding so she and Alex are biding their time. But they are very close and may well be the next couple to make an announcement once Royal Wedding fever has died down.

"They have been virtually living together in London, and Pippa is a regular visitor to his family's stately home in Kent, Olantigh Towers. Alex can't see himself spending his future with anyone else and Pippa, although very picky, thinks Alex ticks all the right boxes - he has the family pile in the country, a smart job in London and he is very handsome."

He must have been the envy of many as a million watched Pippa's carriage ride and balcony appearance in her show-stopping frock and two billion more viewed her on television. The bias-cut satin column skimmed her lissom frame, the cowl neck giving a hint of decolletage and slim fit across her bottom accentuating what is now considered by legions of fans to be her best feature.

She wore lily-of-the-valley in her hair and floral diamond earrings, a wedding gift commissioned by her parents.

Without the talents of Sarah Burton - and the subtle corsetry and invisible underpinnings required for modesty - and her own sense of style, the dress could have been a designer disaster. But instead, it was a triumph. At no stage did Pippa upstage the bride, but she certainly looked as though she was on the same team.

The question must be: What can she do to trump it? Will she indeed settle for married life and a career as a party planner now she has emerged as half of the world's best-known sister act?

She could learn a lesson from one of the other great dynastic marriages of modern history, that of Jacqueline Bouvier to John F. Kennedy in Rhode Island in 1953. Then Jackie's younger sister Lee Radziwill - the glamorous party girl to her sister's more demure and aloof first lady - was the much discussed matron of honour.

Their sisterly dynamic generated the same kind of comment as Kate and Pippa's today, and from it Lee went on to construct a public profile, a career and a grand fortune.