I would like to share a bizarre incident that took place on the evening of the 29th of November, 2012.

A couple of us decided to meet up to celebrate a mutual friends birthday and since we had an HSBC card holder amongst us we thought we'll visit "CEYNOR SEAFOOD RESTAURANT" which is located on D.R Wijeyewardena Mawatha in Colombo (Adjoining the string of Casino's) and make use of the 20% discount they were offering for HSBC Card Holders.

Once we were seated the first question we were asked was whether we were planning to settle the bill by Card or Cash. This at first was quite amusing as we had previously never come across a restaurant that inquired after how we plan to settle our bill even before we had ordered our meal. Thereafter we were handed two menu cards by the waiter and whilst briefly scanning through the menu we realized that the prices were exorbitant as compared to the previous times we had visited this particular restaurant.  Furthermore, we noticed that there were pieces of paper pasted over the original prices which had been substituted by a new price. This looked very "fishy" and so we had one of our mates walk in to the reception and pick up a menu straight off the counter. What followed was just appalling. To our amazement we noticed that the HSBC card Holders were offered a menu card with a price list that was marked up approximately 50%. We were in shock. Never had we come across a restaurant that would serve customers two separate price lists. Thereafter, we quizzed the waiter as to why they were trying to "Rip" their customers off. His reply to this was to say that it was the "Managements Decision". Thereafter we requested to speak to the manager and then waited for over 20 minutes to be told that the manager was "Unavailable".

Upon realization that we were about to be cheated and also to find the manager unavailable we left the venue.

Attached below are a couple of pictures of the Menu/Price List.

Please pass this message on to everyone you think that deserves to know the truth about "CEYNOR SEAFOOD RESTAURANT" to make sure that no other HSBC Card Holder will stand a chance of being "Ripped off" by restaurants of this nature. 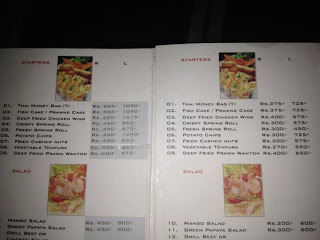 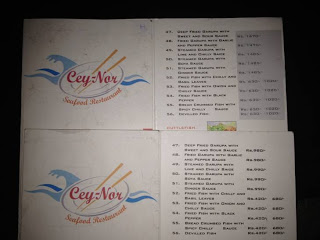