The Malu To Paan Ratio (by yamu.lk) 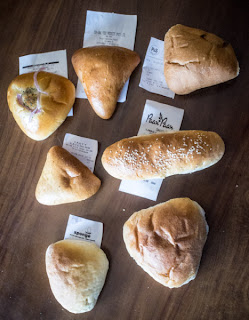 Malu Paan. It's the unsung hero of Sri Lankan cuisine. And like all great foods - actually, just fried rice - malu paan was likely born of the ashes of last night's dinner. The dreggy leftovers of a fish curry, bits of vegetable and the last ala standing of the thel dala all smushed into a pastey mix and stuffed inside a ball of dough, the corners smoothed into sharp points by achchi's wrinkled fingers.

This is malu paan. A soft-bunned, triangular short eat staple. It can be seen in plastic lunchboxes, it can be caught dangling from hands clutching siri siri bags or it can be gobbled up by the side of the roving petti kade; a malu paan can be breakfast, a few malu paans can be lunch and a whole bunch of malu paan can be a party. Whether from the ovens of P&S or the rickety wheels of a Dimo batta this is an iconic piece of Sri Lankan cuisine, and it's sat smugly at the head of our shorteat tables for centuries (well, not centuries, but a long time).

No matter where you are in the city, you're never more than a few metres away from the island's nearest triangular bread. But all malu paans aren't the same, and as we found out, the variations can be quite diverse.

So what are the components of a great malu paan?
1.    Softness of bread
- this is essential, a great malu paan should be lightly burnt on the top and cotton wool soft on the inside.
2.    Levels of fishiness - it may be a fish bun, but the best tend to be the least fishy tasting. Mistaking the fish for chicken is always a bonus.
3.    And most importantly... The malu to paan ratio - does the malu mix spread evenly through out the bread or is it concentrated in a disappointing nugget at the heart of all that bready goodness?
Taking these three features into account, we delved into Colombo's bakeries and Dimo battas, eating our way through the king of the short eats and searching for the alpha bun.

Here's what we found.

Now note that we didn't actually use a ratio. The average in that sense would be something like 3:2, but that's a bit confusing. Instead we measured horizontally and said what percentage of the total was malu. So the rough average was something like 60% malu, 40% bread. Of course it's a three dimensional thing. We measured vertically but that didn't make much difference.
Paan Paan (Rs. 95) 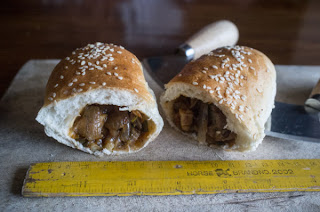 Paan Paan doesn't really qualify as they don't quite produce a malu paan, but their slim, oval shaped tuna bread is delicious. Long and plump, the bread is topped with a smattering of sesame seeds and the golden brown top fades into a gentle white at the base. The outer shell is crusty, the centre sinks with softness and the chunks of tuna are devilled and laced with spice and pepper. This almost tastes like chicken...

Malu To Paan Rating: A solid 69%. A good layer of bread accompanied by the tuna - no mouthful was left unbalanced.

Verdict: Delicious. But it's not a traditional malu paan. 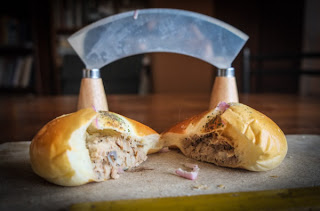 Again, not quite a malu paan. BreadTalk's is more a tuna bun, missing that core ingredient of potato that gives every bun it's starchy filling. We've had a lot to say about BreadTalk in the past, but we'll give them this - they do make a good tuna bite. While the outside looks rather greasy and unappetising with a straggly sliver of red onion were pressed on as garnish, the bun was soft and light as air. Biting into it, however, the bread immediately deflated and collapsed onto itself, exposing the meagre centre of meat and a hollow concave of air. Abysmal ratio aside, however, the filling was excellent - light strands of peppery tuna accompanied by fluffy bread. The three balanced bites we got were good ones.

Malu to Paan Rating: Abysmal - 50%. there was hardly any filling, which is a shame, because it was excellent.

Verdict: A tasty bread, but different from the local malu paans in that it lacks potato and veg. Still good though. If only there were more malu... 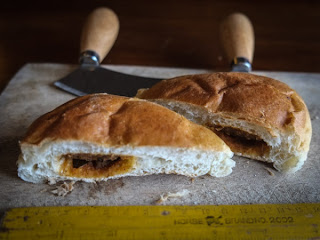 The thing about getting your malu paan from the petti kade is that it can be inconsistent. On some days you have the best malu paan of your life, but just as things are getting good it can all go wheels up. That's what happened here. We thought the lowly Ward Place Petti Kade was a strong contender for the crown, but when we brought our golden prize home and sliced it, we were horrified. The poorest malu to paan ratio we'd seen so far; the filling, while spicy and good just wasn't there.

Verdict: Taste wise, this could be one of the best malu paans. Filling? Barely there. 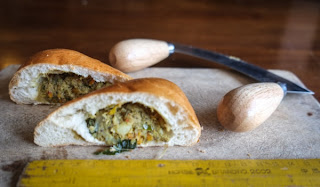 A fairly soft bun with a yellowey green filling and a decent ratio to bread - the most isosceles shaped of the bunch. The taste, however, quite horrible. It was fishy, but the bad kind. Like it had been churned in bad oil and chucked in with all the yucky parts - skin and scales. Not good.

Malu to Paan Rating: a respectable 57%.

Verdict: Way too fishy for the malu to paan ratio to matter. 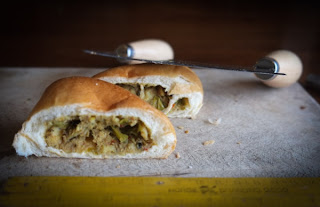 A respectably filled bun. Greeney yellow again, and very peppery and potatoey - sort of like a stew. This had an interesting flavor and good value.

Malu to Paan Rating: an excellent 71%. Tied for top marks.

Verdict: A strong contender in terms of both ratio and taste. 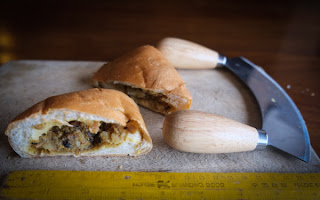 P&S was average. The paan had a smoky burnt taste and was a tad too fishy - we also got some gnarly bits of fish (maldive fish?) as well. Lots of potato. Average ratio.

Verdict: It's aight. But not great. 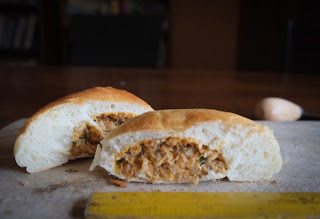 The Sponge malu paan was quite different. The filling was a light orange and the fish was flakey. It was cheesy, there was lots of carrot and veg. This is kind of a more Western version with not too much potato, more like the BreadTalk version but with more spice.

Verdict: A different kind of malu paan - light on the potatoey, but cheesy and different. 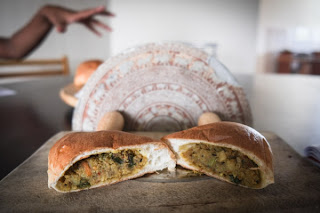 This felt amazing. It was soft to touch and heavy to hold - like a fluffy stone. If you dropped it on the table it landed with a soft sigh - compare to the others, which fell with a dull thud. The top was lightly burnt and the bread was in Baby Cheramy leagues of softness. Great ratio as well - lots of leek, potato, chilli, cumin and carrot strewn in with the fish. It was fishy but not in a bad way. Taste wise, while this close to the best, it isn't quite as amazing as what I remember the Apollo paan to have been - which actually tasted like chicken.

Malu to Paan Rating: Tied for the tops with 71%.

Verdict: One of your best bets for an authentic malu paan 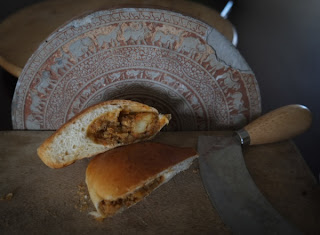 The Fab bun contained an orangey potato paste, and tasted good. It was peppery and the good kind of fishy. Ratio fine.

Verdict: Solid contender, could do with a tad more malu. 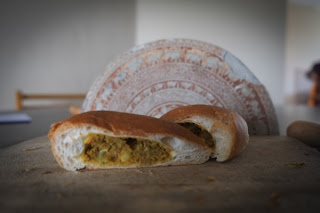 This was one of the driest malu paans. While the taste wasn't bad - quite zesty - the bread was a bit too hard. 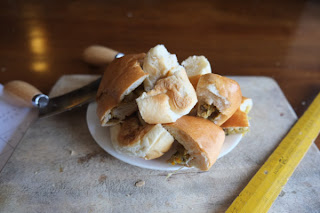 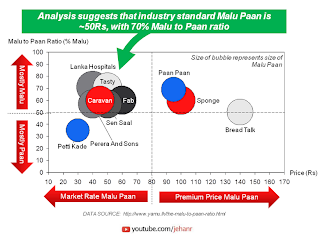